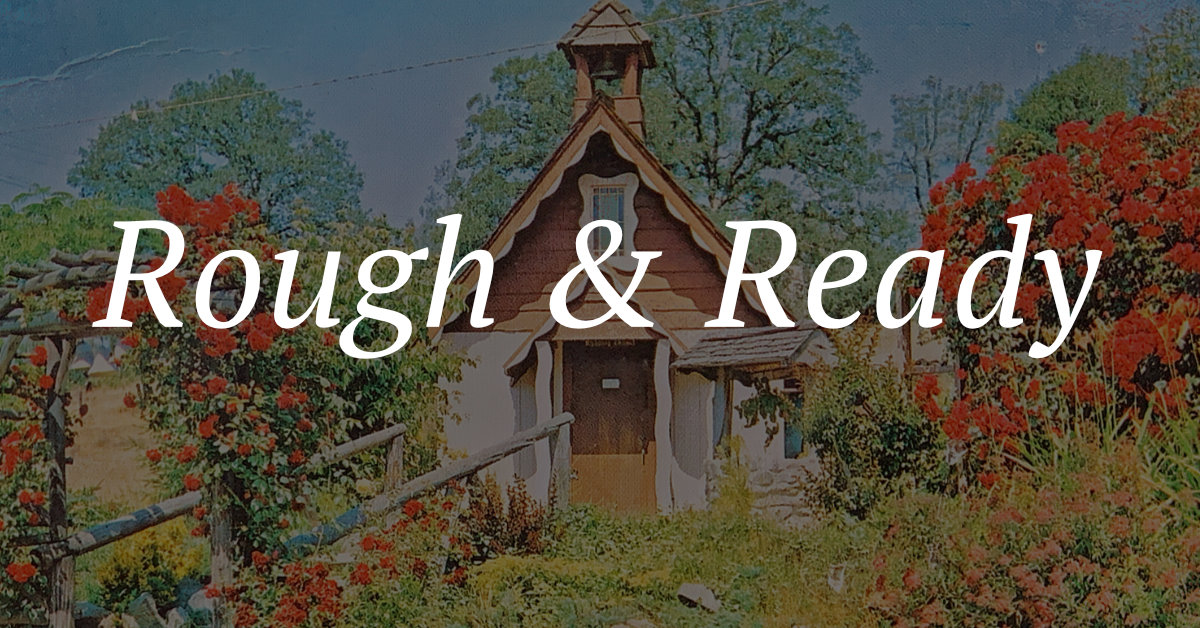 Hi, you should be here and see this. It is really a great town 4 miles east of Grass Valley. I am here with my neighbor for the day it is a lovely country here in the hills.

Love aunt Margaret
Am looking for you folks

Rough and Ready California is a former boomtown in Northern California about an hour away from the state capital of Sacramento. It was founded by Absalom Austin Townsend, who struck it rich in 1849 at the peak of the California Gold Rush. Townsend named his new company and mining claim after his former General, and then president, “Old Rough and Ready” Zachary Taylor. During his first four months, A.A. Townsend reportedly pulled somewhere between $15,000 and $40,000 (about $460k – $1.24mm in today’s dollars) of gold from snow-fed streams before returning to his home in Wisconsin. But Rough and Ready is not known for its gold, it’s known for its attempt to become a sovereign nation.

Aunt Margaret mentions in her message that it’s “lovely country here in the hills” which ties in perfectly with the town’s lore. Loads of articles on the internet document the story of Rough and Ready California as the first town to “secede from the nation” when, as the city website tells it, a tax on all mining claims pushed the town to declare its independence.

That’s right, on April 7th, 1850, a full 11 years before the southern United States attempted to secede from the nation, a small mining community in Northern California, was the first to attempt to part ways with the U.S. The newly elected “president” penned a letter to President Zarachy Taylor saying in part, “We…deem it necessary and prudent to withdraw from said Territory (of California) and from the United States of America to form, peacefully if we can, forcibly if we must, the Great Republic of Rough and Ready.”

But legend has it the new republic didn’t last long, and a mere three months later, after finding the saloons in Grass Valley wouldn’t sell liquor to “foreigners,” The Republic of Rough and Ready unceremoniously voted to rejoin the union.

The story is almost too good to be true, and sadly, it looks as if may just be. When reading the Statutes of the First Legislature of the 1850 California State Assembly we find no taxes on mining claims. In fact, there’s no mention of mining until April 13, 1850, when the infamously cruel and racist Foreign Minors Tax was passed into law. Moreover, when searching California newspaper archives in 1850, one of the only time Rough and Ready comes up is on April 15th in a small article about a gang of Rough and Ready citizens who massacred 25 indigenous Americans over a cattle dispute.

It’s also been reported that due to some missed paperwork the one-time independent republic wasn’t formally readmitted to the U.S. until the United States Postal Service added it back to the postal map in 1948. The truth is that Rough and Ready did see its post office reopen in 1948, but only after arguing that its population size warranted one. In fact, an article in a Sacramento announced the first post office within the town borders of Rough and Ready in December 1850, just months after its supposed independence and readmittance.

While the myth isn’t based in fact, it’s still a fun story. If you’re interested in visiting Rough and Ready California you can be sure to still find a historical mining town filled with mining attractions. While never in history was it a nation-state, it’s still an interesting part of California State history.

That’s all I have for you this week! Send your family a postcard!

Special thanks to Megumi and Nettie for copy editing!